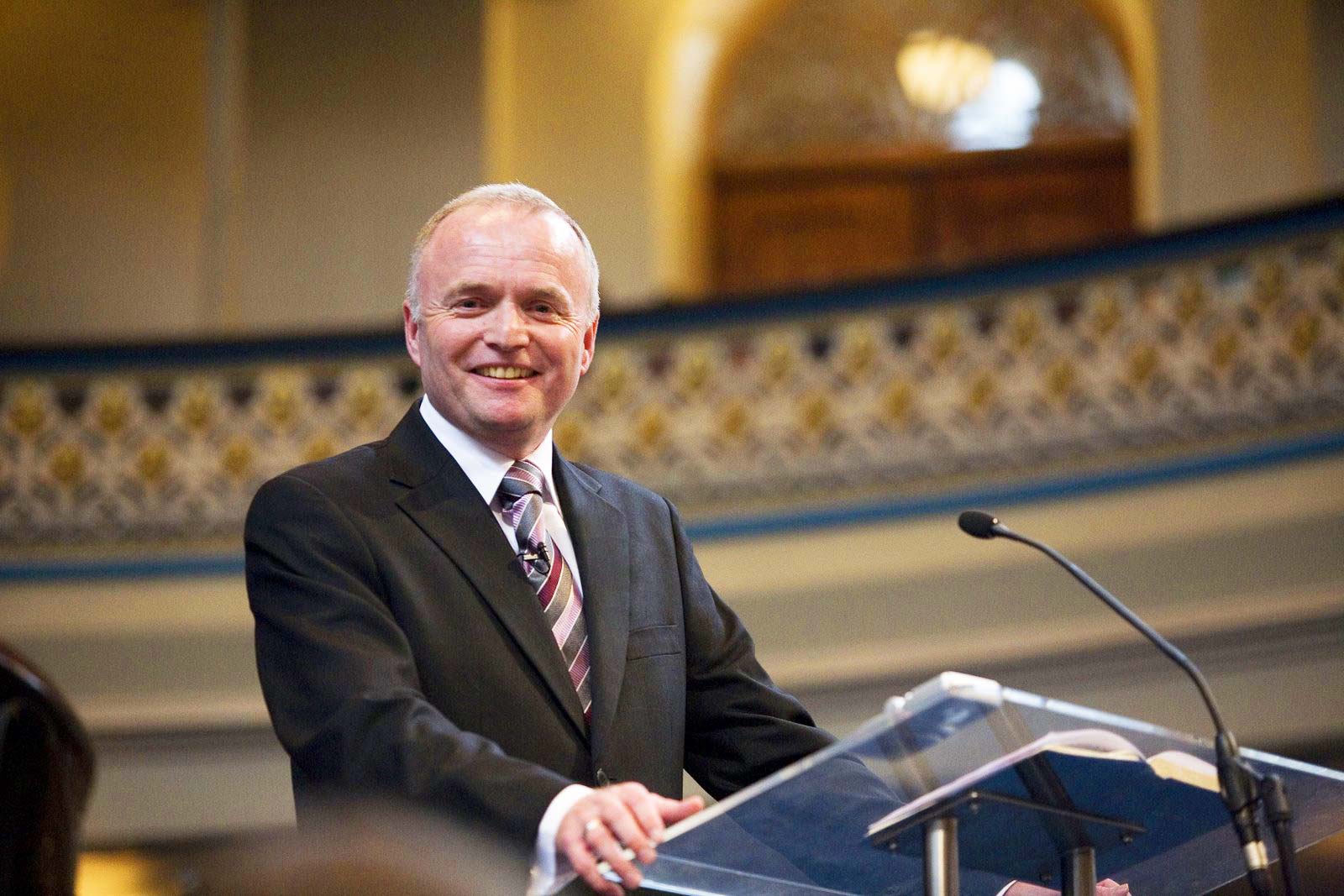 This post is a tribute to Greg Haslam, spiritual father and friend to many at Westminster Chapel. He served as Senior Minister from 2002 to 2016. He was promoted to glory on 20th August 2021. You can read an excellent tribute by Greg’s son, Andrew Haslam.

A giant oak tree has fallen in the forest and few may have noticed its falling. Yet this was an English oak born and grown in the hard stony soils of Liverpool in the 1950s to be trained and pruned in the nurseries of London Theological Seminary and then planted out in a rich orchard of Winchester in Hampshire. It was here I first met Greg and sheltered under his strong theological boughs and loving pastoral care. Heather and I feasted on his ministry and were both delivered from besetting sins and fears.

He was reformed, a man of the word, he devoured (and purchased) books and his roots were constantly seeking the life-giving water of the Holy Spirit. His teaching ministry, preaching and writing, grew branches across the city, the nation and eventually the world.

He carefully trained men for Christian ministry, he let me in close to his heart and his many passions. He loved his family, Ruth, James, Andrew and Josh, their wives and many grandchildren. He also loved the church, and in twenty years saw a small tin tabernacle with some 60 people grow and multiply to fill, first a purpose-built barn, then having to move again to see God fill an old Bingo Hall with over 400 believers. He was a prophet, he could see what few others saw and led God’s people out of bondage into Christ’s glorious freedom and Holy Spirit adventures.

His final move was to Westminster Chapel, now a mature leader, a mighty oak in full leaf and flourishing. His roots sought grip in the shallow city soil, littered with the rubble of former Chapel history and yet he stood strong and courageous in the winds and storms of so many spiritual battles. The church was blessed by his ministry in so many noticeable but also hidden ways.

He was a Calvinist through and through and even on the hardest day of bad news from the hospital about his mental decline he declared God was good and if God had been faithful in the past he would trust him for whatever the future brought. It was the hardest fight of his life, the rapid losing of memory, the tree limbs hacked back until all that was left was a pollarded trunk. I never once heard a word of complaint.

And so this mighty tree has fallen, scattering acorns near and far, that will in time grow to become mighty oaks in the future. I wept at the news and will miss my dear friend and mentor but know this day he has never been more alive, delighting in his Saviour and clothed with immortality.

Gillian and I first met Greg (and soon afterwards Ruth) when he came to London to study at London Theological Seminary in 1978. During his time of training, he and Ruth made the Chapel their church home from home. As a friend and later our pastor, we were greatly blessed by all that he brought into our lives individually and as part of Westminster Chapel. Here are some of the things that blessed us and which we feel mark “the measure of the man”

We are about the same age as Greg. We grieve that this good man has been taken from us so relatively young. The mystery of why has to be left with God but we rest in the same confidence Greg had that God always works everything according to his own perfect and eternal will and purposes.

God is sovereign. That is the capital T-truth (a phrase I learned from Greg) that he embodied. It’s also the phrase he used with us when he finally found out the sickness he was suffering from. He shared that after many tests and conversations, according to his consultant-doctor he would never be able to preach again. I couldn’t hold back my tears. I loved this man. We’d prayed against this. There were sermons he was meant to preach; books he was meant to write. We’d just, naughtily, because we did it without him initially knowing, set up a deal for a book with a publisher for him. But he accepted what was happening with extraordinary faith. In fact, he even said he was thankful to God for giving him more years than he expected to live, extra time with his precious wife, sons, and grandchildren, having come very close to death with acute pancreatitis years before.

Greg was formidable. He courageously fought for Truth with creative, powerful, prophetic preaching. He laboured to know the Truth. He read, and he read. He had so many books in his office and library above where we worked, we worried one day they might all come crashing down upon us. You could ask him any question about theology and he would not only give you an impressively detailed answer, but also a reading list so you could find out more for yourself. I sat in on pastoral care sessions and witnessed his compassionate heart. He also had a cheeky sense of humour. On one occasion, I accidentally message him rather than my wife. I was in a meeting and someone had mentioned his name whilst I was texting. “Hi qt, so sorry, the meeting is overrunning, I’m going to be late. Love you x x x” His quick reply: “Hey lover boy, didn’t know you felt that way about me. x x x”.

Every week I’m in ministry, I realise just how much he taught me. He helped me to think biblically. He helped me to preach better. And not just me, but many at Westminster Chapel. I am so, so thankful for this mighty man of faith, and grateful that he is now freer than ever to rejoice in the Father’s arms.

How can we honour him? One way is to be faithful to the foundations he laid at Westminster Chapel, because they were of God. Greg spoke passionately about: 1. continuing to be a Word & Spirit church; 2. moving from one-man ministry to beautiful body ministry, led by a team of elders; and 3. building an Antioch church, a resource church, launching trajectories of mission in London and all over the world. His passing is a powerful encouragement, that despite all the challenges and trials of a global pandemic, we must keep pressing on. For God is sovereign. And he has many people in this city.